Intrigue, Terrorism, History, Art and the Secrets of the Church Collide in the New Thriller "Upon This Rock"

A gay American couple in Italy investigate the suicide of a cleric in the picturesque city of Orvieto -- and find themselves plunged into a conspiracy that may destroy the Catholic Church -- in the stunning new thriller, "Upon This Rock." 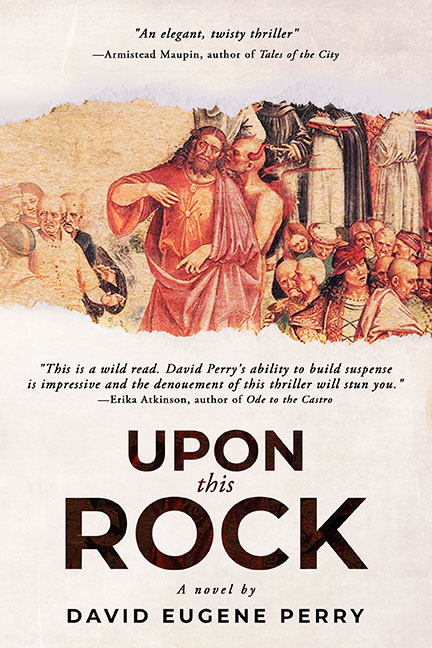 Fresno, CA, September 16, 2020 --(PR.com)-- An American couple in Italy investigate the suicide of a cleric in the picturesque city of Orvieto -- and find themselves plunged into a conspiracy that may destroy the Catholic Church -- in the stunning new thriller "Upon This Rock" (Pace Press, publication date September 15, 2020) by David Eugene Perry.

A Dan Brown–esque tale of intrigue, history, art, the secrets of the Church, and the conspiracies of the powerful, "Upon This Rock" is a relentless page turner that will keep readers on edge from its original premise to its startling denouement, set in the stunning background of one of Europe’s most captivating cities.

San Francisco business executive Lee Maury and his husband Adriano come to the historic and beautiful Italian city of Orvieto to rejuvenate following the death of a close friend. Lee and Adriano immediately fall in love with Orvieto’s beauty, history and tight-knit community, but Lee becomes fascinated by a local tragedy.

One year earlier, Deacon Andrea, a much-loved candidate for the priesthood, was denied ordination and committed suicide by flinging himself off the cliffs of Orvieto. Lee is struck by the parallels between his life and Andrea’s -- both are the same age, both were candidates for the priesthood and both attempted suicide. Growing obsessed with learning the truth about Andrea’s life and death, Lee can’t resist playing amateur detective.

Everyone Lee and Adriano meet in Orvieto has some connection to Andrea and some responsibility for his death. Every truth Lee uncovers reveals an even greater mystery, and he stumbles on a conspiracy of terrorism, human trafficking and a plot to destroy one of the Church’s most sacred shrines -- all somehow linked across 500 years to Renaissance Pope Clement VII, who escaped to Orvieto after the sack of Rome in 1527.

Before they know it, Lee and Adriano’s dream vacation becomes a race to save innocent lives -- and not get killed in the process.

A compulsive page-turning thriller with high stakes action in a glamorous setting -- and filled with countless unforgettable characters -- "Upon This Rock" is a sensationally entertaining read from a major new talent.

About the Author:
David Eugene Perry is the founder and CEO of the public relations firm David Perry & Associates, Inc. Perry is also the host/producer for the weekly LGBT TV show 10 Percent and a journalist who has contributed to several national publications. Perry and his husband make their home in San Francisco and Palm Springs.