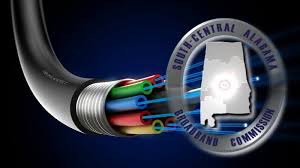 Montgomery, AL, August 12, 2021 --(PR.com)-- Getwiredalabama, which is a public-private partnership between the South Central Alabama Broadband Cooperative District (SCABCD) and Omnipoint Technology Partners will provide next generation broadband to the 17 counties of the historic black belt. The black belt communities include Civil Rights Meccas in Alabama like Selma, Tuskegee and Montgomery.

These counties like many areas across the South and the Nation are considered broadband deserts which are areas in which either don’t have any internet service at all or very little and unreliable service. Clearly this leaves these underserved populations at a huge disadvantage when it comes to economic, neighborhood and community development. Broadband deserts also leave historically disadvantaged school districts and their teachers and students yet again on the short end of the stick. In addition, multiple Historically Black Colleges and Universities will also be able to utilize this network.

Board President Commissioner Charlie King, Jr. of Lowndes County Board of Commissioners reiterated the point that these places are at a clear and distinct disadvantage, “Much like a food desert, a broadband desert can have a compounding negative impact on the health of the community. A place without proper internet is a place devoid of optimally functioning businesses, schools, churches, libraries, community organizations and homes. Homes with students and residents are at a severe disadvantage when compared to places with adequate wi-fi.”

Key to this 600 million dollar project is providing first class internet access at an affordable cost to the consumer in these areas.

Getwiredalabama has opened its first office location in Hayneville, AL and will create 250 well paid, permanent jobs through this project which will stimulate economic growth. The official website site is www.getwiredalabama.com. Residents can also earn income by participating in the Omnipoint Affiliate Program, www.omnipointaffiliate.com

The private company, Omnipoint will build a hybrid solution which will include thousands of miles of fiber to homes, wireless devices, CBRS (Citizens Band Radio Spectrum) and smart city technology. What makes this project unique besides the private-public partnership is that the infrastructure will be accessible for other internet service providers to operate on for competitive affordable services such as streaming TV, Telehealth and Voice Over Internet Protocol.

Omnipoint will operate the network under a 30 year agreement and 50% of profit will go back to the Southern Alabama Broadband Cooperative District for distribution to counties for subsidizing internet payments and economic development.