The producer and director Michael Craig of Copernicus Films discovers inspiration in the pioneers of the Russian Avant-garde of the 1920s and 30s. 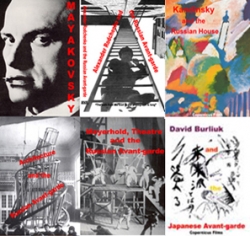 Moscow, Russia, May 16, 2008 --(PR.com)-- The producer and director Michael Craig of Copernicus Films discovers inspiration in the pioneers of the Russian avant-garde which has taken him on a journey from the streets and boulevards of Moscow to the shores and forests of a Pacific island off the coast of Japan.The result is a documentary series of 6 films about the Russian Avant-garde of the 1920s and 30s which has been released on DVD on Amazon.com.

Using computer graphics ,archive footage and filming in locations as wide ranging as Russia, Germany, and Japan, Michael Craig follows in the footsteps of some of the great Russian artists of the Russian Avant-garde, (Alexander Rodchenko, Meyerhold, Vladimir Tatlin, Malevich, David Burliuk, Vassily Kandinsky) These artists changed our perceptions of art and reality with their visions of the future and their struggle to change the present. Michael Craig has come up with a series of films which explores all the major themes of the Russian avant-garde - futurism, Primitivism, Rayonism etc.

Estelle Winters of Timelines comments: “In this comprehensive and wide ranging series about the Russian Avant-garde, the director Michael Craig and Copernicus Films have produced an in depth exploration of this phenomenon in the history of art. It’s a remarkable achievement!”

Even though Michael Craig regards Moscow as his home, he mentions that it was a pleasant experience to be whisked from the snow covered streets of a Moscow winter to the tropical heat of the Bonin islands in the middle of the Pacific Ocean to film the David Burliuk section of the series.