World Rivers Day 2018, set for September 23 (always the fourth Sunday in September), is a global celebration of our rivers. The event strives to increase public awareness of the values of our waterways while also promoting the need for sound river stewardship. The day's festivities will range from stream clean-ups and habitat restoration activities to educational programs and community riverside celebrations. More than 70 countries and millions of people will participate.

Millions of people around the world will participate in World Rivers Day on Sunday, September 23. With many of the world’s rivers facing increasing pressures associated with climate change, pollution, and industrial development, more than 70 countries are participating in this year’s festivities. Many events around the world will focus on educational and public awareness activities while others will include river cleanups, habitat restoration projects, and community riverside celebrations. World Rivers Day has its roots in the great success of BC Rivers Day, which has been celebrated for the past 38 years in Canada’s western-most province.

World Rivers Day strives to increase public awareness of the importance of our waterways as well as the many threats confronting them.

“Rivers are integral to all life. Yet, many waterways continue to face an array of threats and are often impacted by inappropriate practices and inadequate protection,” says Mark Angelo, World Rivers Day Chair and Founder and Chair Emeritus of the Rivers Institute at the British Columbia Institute of Technology.

Endorsed in its inaugural year by the United Nations University and the International Network on Water, Environment and Health, and with groups such as the Sitka Foundation as lead sponsor along with the support of others such as the Real Estate Foundation of BC and the Pacific Salmon Foundation, World Rivers Day events will take place in countries ranging from Canada to England, the United States to India, Australia to Bangladesh, Nigeria to Malaysia, and from the Caribbean to the great rivers of Europe.

“Millions of people, dozens of countries, and numerous international organizations will be contributing to World Rivers Day,” says Angelo. “It provides a great opportunity for people to get out and enjoy our waterways. At the same time, the event strives to create a greater awareness of the urgent need to better care for our rivers and streams.”

Robert Sandford, EPCOR Chair of Water Security at United Nations University, and an internationally recognized expert on scarcity and conservation issues, says, “World Rivers Day is rightfully acknowledged and hailed for its global effort to increase awareness of the vital importance of our water resources and the need to properly protect and steward them in the face of mounting pressures.”

Through its first decade, World Rivers Day complimented the UN’s Water for Life Decade and continues to do so as part of the UN’s current Water Action Decade. In addition, groups such as the United Nations University and the International Network on Water, Environment and Health remain valued supporters. Angelo, a recipient of the Order of Canada, his country’s highest honor, as well as the inaugural recipient of a United Nations Stewardship Award for Science, Education and Conservation, initially founded BC Rivers Day in British Columbia back in 1980 in conjunction with the Outdoor Recreation Council of BC. He then successfully lobbied numerous organizations as well as agencies of the UN to recognize World Rivers Day in 2005. 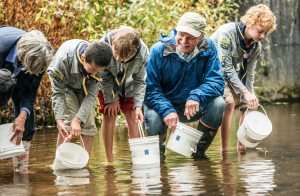 In the run-up to World Rivers Day, event founder and Chair, Mark Angelo, releases salmon into a restored creek in Burnaby with local scouts.