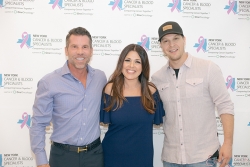 DeGraw, who lost his mother to pancreatic cancer in 2017, spoke about the new NYCBS cancer treatment center. “Cancer never hit me personally until my mother became ill. It’s the hardest thing ever to talk about,” said DeGraw. “This facility is the reason I’m here. It’s nice that there’s a local facility like this.”

DeGraw delighted audience members with a night of great music and kind words. “I’m excited to be here with all of you for the opening of this great building,” said DeGraw. He was especially pleased to reconnect with long-time friend, Dr. David Chu. Both DeGraw and Dr. Chu attended the same school growing up and maintained a friendship over the years.

DeGraw described his mother’s passing as a “horrible time.” He has opened up publicly, saying that he was unable “to finish writing a single song.” Since then, DeGraw has been an avid supporter of cancer research, speaking on behalf of numerous organizations and charities.

The NYCBS treatment center is located at 49 Route 347. Dr. Jeffrey Vacirca, CEO of NYCBS explains his vision behind the building. “What we wanted to do for our patients was create a facility where we can do everything for them in one place. Without the help of some remarkable people, we could not have made this happen.”

NYCBS’ newest facility encompasses several amenities cancer patients need in one spot. “It is an unbelievable honor and a privilege every day to care for the heroes we see every day,” said Dr. Vacirca.