Is burning and deforesting America’s public lands a genuine solution for wildfire? Or is it something along the lines we saw in Brazil, where forests were destroyed to create more livestock grazing? 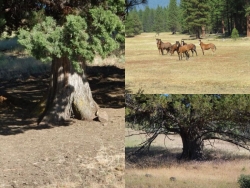 Yreka, CA, August 28, 2019 --(PR.com)-- According to a Press Release issued on August 17, 2019 by the Department of the Interior (DOI), they allege they “have been working tirelessly to implement preventative measures to limit the size and scope of wildfires, treat current wildfires already underway, and protect wildfire-prone areas to best safeguard people and their communities.”

Of course, there is a huge gap in results on public lands between "working tirelessly" and working intelligently and effectively. The DOI’s track record of managing public lands has been far less than acceptable, beyond running tourist destinations that are nevertheless second rate to those run by private enterprise.

U.S. Secretary of the Interior David Bernhardt said, “In collaboration with local, state, and other federal partners, we are using everything in our arsenal to prepare for wildfires this year, treating more than one million acres.”

What isn’t front and center in the DOI plan is that their idea of “treating” the landscape is primarily burning it using prescribed burns. And clearly, they are not using "everything" in the arsenal.

Prescribed burning is the most obtuse and costly method available for reducing the key wildfire fuels of grass and brush given that in the process of burning nearly 1-million acres of public lands we face these realities:

*Hundreds of millions of tons of carbon compounds (greenhouse gases) will be sent into our breathing air and the atmosphere; and,

*Wildlife will be killed by fire and smoke, numbering in the millions of animals annually; and,

*Grass and brush (key wildfire fuels) return to the landscape annually; and,

*The healthcare costs related to the impact of the toxic smoke created by annual prescribed burning will be in the $-billions of dollars annually; and,

*Prescribed burning jeopardizes the health, safety and welfare of all Americans since toxic wildfire smoke can make people ill even at great distances from the source of the fire.

A far more intelligent, natural and cost-effective solution for reducing annually recurring grass and brush wildfire fuels is the implementation of a national herbivory plan. Native species large bodied herbivores, such as wild horses and deer, are nature’s evolved grass and brush control specialists. The DOI pretends that this is not the case, given their current mismanagement of native species American wild horses and burros coupled with, the evidence presented via natural history and ecology.

And for the most remote wildfire prone wilderness areas that are manifestly unsuited to livestock grazing, the Natural Wildfire Abatement And Forest Protection Plan is effective and is a cash-positive Plan that also fulfils the intent of the Wild Burro And Horse Protection Act of 1971.

"Back in the 1960's-1970's, deer populations in the western landscapes of California and Oregon had over 2-million more deer than today. So even when we thinned and logged trees opening-up the forest canopy and allowing more light to support the growth of even more grass and brush, we had plenty of deer and elk to keep it all grazed-down to nominal conditions year-round. And generally, back then wildfires were infrequent, relatively small with low intensity and short-lived; nothing like the fires we are experiencing today."

"That is no longer the case: Our combined deer herd in California and Oregon is down 2.2 million animals that were previously removing about 2.7-million tons of annual grass and brush (just in CA & OR). This is the same grass and brush that has kindled and is the primary fuel for the massive smoke-producing mega-fires plaguing California and Oregon (Mendocino Complex, Carr Fire, Sonoma Fire, Thomas Fire, Kalmiopsis Chetco Bar Fire, etc.)."

"Logging helped to control the frequency and intensity of wildfires back in the 1960s and 70s via culling a reasonable percentage of some of the heavier fuel loading (10-hr. & 100-hr. fuels) because of the heavy fuel-removal synergy with the millions of deer (and elk) present in the landscape back then; it won't work now the way it worked then!"

"Prescribed burns have only proven to be a risky and costly enterprise (they can become wildfires), adding even more air pollution (deadly particulates that are already killing Americans) to our breathing air and environment; it's just more tape on a leaking pipe. The trendy meme of 'prescribed burning' is only supported by some scientists who absurdly assert that 'the native Americans did it'. And in doing so, clearly failing any comprehension of natural history and the many tens of millions of grazing megafauna that created and maintained the fire resilient ecosystems that were present back in the days when a token amount of fire was used by the native Americans on the North American continent."