Police officer Brandon Hultink was wounded in the line of duty, paralyzed, in despair and ready to end it all, but he climbed out of depression and addiction into a new life, as detailed in his new autobiography, "The Backpack." 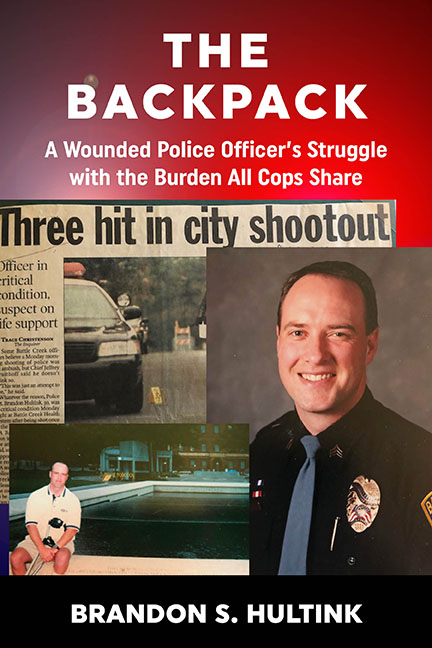 Fresno, CA, April 16, 2020 --(PR.com)-- "I can still remember the taste of metal in my mouth from the barrel of the gun..." Wounded in the line of duty and paralyzed, police officer Brandon S. Hultink made an amazing journey from despair to hope, as he writes in his frank and compelling autobiography "The Backpack: A Wounded Police Officer's Struggle with the Burden All Cops Share," new from Quill Driver Books.

After the shoot-out that put him in a wheelchair, Brandon S. Hultink was ready to put an end to it all. Just 30 years old, a runner, a triathlete, a weight lifter and a dedicated police officer, Hultink was used to being a man of action. Now paralyzed, physically dependent on the aid of others and incontinent, Hultink felt humiliated, then fell into a deep depression. Even worse, the physical pain of his shattered pelvis had led him to a growing addition to opioids.

Finally, six months after his crippling wound, Hultink dragged himself out of bed at 2 a.m. while his wife and children were sleeping, to painfully crawl down to his basement, find his service revolver, and put it in his mouth. Only the thought of his wife finding his body and abandoning his boys stopped him from pulling the trigger.

In "The Backpack," Hultink recounts his long, tortuous path from his time of despair and how faith in God and the humility to accept help brought him back -- out of addiction, out of depression, even out of his wheelchair and back into living.

Hultink gives a moving account of the whole sweep of his life, from the youthful idealism that led him to police work to the gradual descent into cynicism and depression that dogged him long before his near-fatal shooting, and the people and programs that helped him put his life back together.

But "The Backpack" is more than one man's story. Hultink emphasizes that his struggles are also the struggles of thousands of police officers who suffer from depression and post-traumatic stress. Hultink describes how the danger and trauma of police work leave lingering emotional wounds in many officers, while police culture encourages officers to suppress their feelings.

As Hultink repeatedly said in his resistance to treatment, cops don't do touchy-feely. Police officers stuff every trauma into a metaphorical "backpack" until the burden overwhelms them. Hultink writes unflinchingly of the mental health crisis affecting police officers and offers proposals for improving mental health services for police.

An intensely personal story of anguish and survival, "The Backpack" offers hope to everyone -- police and civilian alike -- who struggle with depression and pain.

About the Author
A graduate of Western Michigan University and the Thomas M. Cooley Law School, Brandon S. Hultink served for 15 years as an officer with the Battle Creek, Michigan, Police Department and for 10 years as an assistant prosecutor with the Calhoun Country Prosecutor's Office. Hultink currently works as a parole agent for the Michigan Department of Corrections. He lives in Battle Creek with his wife and three sons. "The Backpack" is his first book.