What Happens When You Combine the Tribeca Family Festival Street Fair and NY Artist Alex Beard with on Site Energy Co? You Get BioEla, the 208 Volt Elephant 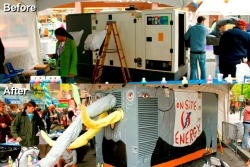 Hicksville, NY, May 11, 2008 --(PR.com)-- In a behemoth effort to show their commitment to "going green" this year, the Tribeca Film Festival’s Family Street Fair challenged nature artist, writer and traveler, Alex Beard. The challenge was to create an arts and crafts activity that would incorporate one of the events' diesel generator in a “Green” display. Furthermore, the event had to be interactive with the children, as well. Alex’s studio set up a painting station where the children could paint their favorite animals on paper plates. The plates were hung from strings under a tent surrounding Alex and the generator he was transforming into an elephant. The master plan called for the generator to be camouflaged as an elephant, complete with a mighty trunk and tusks.

The generator was of the same type as the ultra-environmentally friendly units that were provided by On Site Energy Co (OSEC) to power the event. Sponsors such as the likes of Bloomberg, Delta Airlines, Nintendo and New York’s own Rangers, Knicks & Jets also benefited from OSEC's supplied power. As the elephant came to life throughout the day, it was the subject of conversation and the place to be photographed in the children’s area. “Mommy, Daddy, what is that man painting?” could be heard from all directions. By mid-day, as layer upon layer of paint was applied, it was clear that Alex was achieving Nirvana. Mere hours before the festival's end, he had successfully transformed what might otherwise be considered a mechanical nuisance into an object of beauty and purpose that peaked the kid's curiosity. The message that the Film Festival and OSEC wanted to convey was clear: in today’s world, there are certain things we can’t live without (electricity being one of them) and you can successfully create electricity without polluting the environment with noise, smoke and foul odors.

As Joe Gere, Director for Green Iniatives, told GreenbyDesignTV and GoTV Networks, “We are here to make a statement. We genuinely care about what happens in this community and the air the inhabitants breathe. Having been here during both 9/11 and 2/26 and experiencing the issues involved during those times, we have made it a priority to follow the practice of not polluting the environment with unnecessary contaminants. That is why we are NY’s Green rental company.” Following the attacks on the World Trade Center, Robert De Niro, Jane Rosenthal and Craig Hatkoff founded the Tribeca Film Festival in 2001. The idea behind this mastermind was to spur the economic and cultural revitalization of lower Manhattan through an annual celebration of film, music and culture.

On Site Energy Company, the Northeast’s leader in the rental of power and temperature control equipment was established in 1984. Since then, they have been the most comprehensive portable energy solution company in the Northeast. They specialize in sound attenuated generators, comfort cooling, air conditioners, chillers, electric heating, oil-fired heating, as well as all the accessories and distribution that compliment their top of the line equipment.

On Site Energy Company gives strong consideration to the impact they leave on the environment. Because they care about our planet and fellow people, they offer biodiesel in their diesel-burning equipment. Biodiesel is a renewable alternative fuel created from vegetable oils and animal fats and contains no petroleum. It is biodegradable and non-toxic. On Site Energy Company and its customers are contributing to make the Earth a better and healthier place.