Westbridge Film School (WEFIS) announced today that it has discovered people from around different Latin American countries who have the potential of becoming successful movie actors, and that it has granted them a full scholarship to study its one year Acting for Film program. 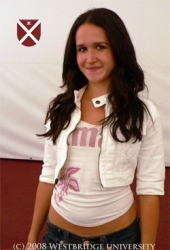 Mexico City, Mexico, September 12, 2008 --(PR.com)-- WEFIS had issued a call last June, to discover talented people in Spanish speaking countries, and received more than two hundred applications from around the continent for the scholarship.

“It wasn't easy, we had to go through a very intensive selection process, but now that it’s over we are confident that the people we chose have all the potential to become professional movie actors and actresses”, said Mauricio De la Orta dean of Westbridge Film School in Mexico.

The persons that were granted such an important opportunity are: Wendoly Rodríguez Corsino from Dominican Republic, as well as Aminta Paiz and Carol Stephanie Calderón from Guatemala.

With this benefit, the people who got discovered by Westbridge Film School, not only will save a total of $5,500 US in tuition fees, but also will receive the opportunity to act in short films, acquire practical knowledge, and learn directly from film industry professionals.

“We are investing a little over $15,000 dollars in scholarships to prove to the world that in the Spanish speaking population there is a lot of acting potential to be discovered, and that it can be found in Normal People. Now that we have discovered it, we are totally committed to developing it”, concluded Mauricio De la Orta.

Westbridge Film School is part of Westbridge University, an educational institution founded in 1999 that is focused in preparing successful professionals in creative fields such as Culinary Arts, Animation, Visual Effects, Film, Acting and Marketing.

During its nine years of existence, Westbridge, the University of Creativity, has been able to position its graduates in the most recognized companies in the industry, both in Mexico and Worldwide. Westbridge University is recognized in the industry as a breeding ground for ethical creative-people, with practical skills, and who are in love with their profession.