Thirteen men over sixty in Madrid, New Mexico, have bared all to expose the truth about this former old west ghost town turned hippie haven. They insist that the setting for Disney's movie, Wild Hogs, is neither cute nor bland. Their calendar debuts on September 1 with a free Nude Geezer Weenie Roast and signing party. The men are a veteran fighter pilot, a cowboy, a doctor, a retired stock exchange floor trader, a lawyer, a miner, a biological consultant, an impresario, an engineer and others. 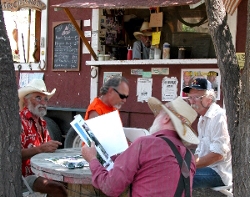 Santa Fe, NM, August 17, 2007 --(PR.com)-- A veteran fighter pilot, a cowboy, a doctor, a retired stock exchange floor trader, a lawyer, a miner, a biological consultant, an impresario, an engineer, and other men over sixty have bared all for a Nude Geezers Calendar in this former old west ghost town, turned hippie haven.

The men will host a Nude Geezers Weenie Roast for the debut of their calendar on September 1 in Madrid, New Mexico (pronounced MADrid). Len Self, proprietor of The Miner’s Chuck-wagon (75 years old and one of the geezers) said, “I’ll cook free hot dogs for everybody that shows up and most of us geezers will be here to sign the calendars.” Madrid is a much-visited tourist stopover along New Mexico’s scenic Turquoise Trail. Self is presented in the calendar wearing cowboy boots, playing a washtub bass and seemingly levitating his cowboy hat.

The town was the setting for Disney’s popular movie, Wild Hogs, released earlier this year. Peter Bruso, 61 and one of the geezers, proprietor of The Old Boarding House said, “What the public saw in the Wild Hogs movie is not Madrid. Our community is feisty, quirky, talented and caring. A visitor once described the town as fetchingly scruffy. As the calendar will document, these geezers are a bunch of fetchingly sexy guys.”

The calendar project is the brainchild of Madrid area photographer, Doug Wesley. It is financially backed by Wesley and several of the men who were photographed. Wesley said, “This summer I moved into geezerhood with my sixtieth birthday and I gave myself this project as a birthday gift. Making the pictures has been a rewarding experience for me. These men are strong, confident and I was surprised at how good-looking they are.”

But wait. You don’t even have to buy a $20 calendar to take a peek. A website called Geezers-Illustrated.com went online this month to promote the project and shows all the pictures. While the men are called “nude geezers,” the pictures expose mostly naked chests and legs with a few bare bottoms.

In July, the local newspaper, The Santa Fe New Mexican, exposed the project, devoting a third of its front page to pictures and a story titled Naked Ambition.

The Nude Geezers 2008 Calendar features 13 men over sixty and one woman, 31 year-old Kimberly Brooks of Cerrillos, New Mexico, who remains fully dressed. She posed with 70 year-old Dale Edwards, whom Wesley says requested a “beautiful young woman” when asked what prop he would use to cover his privates. Edwards, a recent retiree who says his current goal is to “live and live and live” got his wish.

Entertaining announcement of Nude Geezers Calendar with links to a website full of pictures.